Few professional teams hold reunions, but with the help of a British cycling club the Dutch riders of TI-Raleigh have started, and they invited Cycling Legends to the most recent one. 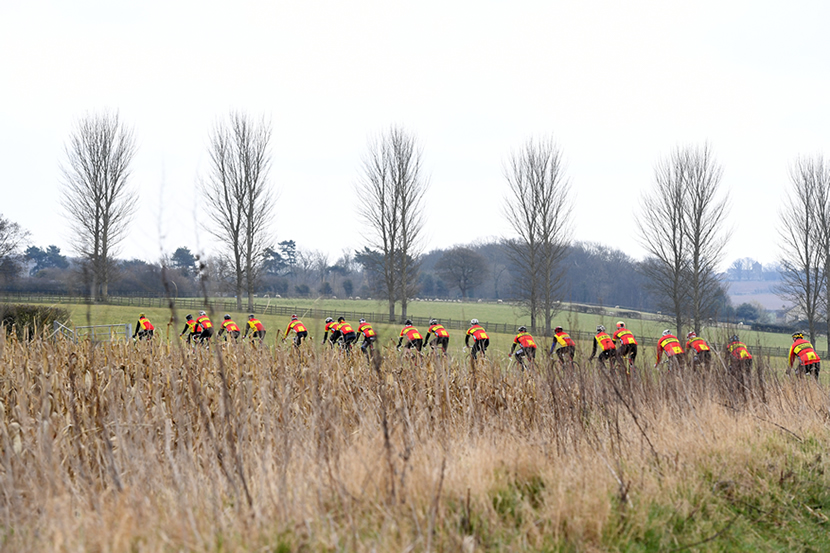 TI Raleigh is still a big deal in Dutch cycling. De Raleigh ploeg, Dutch for the Raleigh team, started in 1972 as a campaign to sell Raleigh bikes in Europe and ended with Dutch riders winning classics, world titles, Grand Tour stages, and the Tour de France. Now some of those Dutch riders have started meeting and riding with a British group, the TI-Raleigh Vintage Cycling Club, which collects restores and rides bikes produced by Raleigh’s Service de Course, the legendary Special Bicycle Development Unit (SBDU).

The SBDU built bikes for the TI-Raleigh team as well as many British cycling stars, plus some innovative one-off specials. It was based in Ilkeston, Derbyshire and run by Gerald O’Donovan, former owner of Carlton Cycles who knew more about steel frame design than almost anyone else at the time. He was ably assisted by a frame-builder, Mike Mullet and by TI-Raleigh’s chief team mechanic, Jan Le Grand. 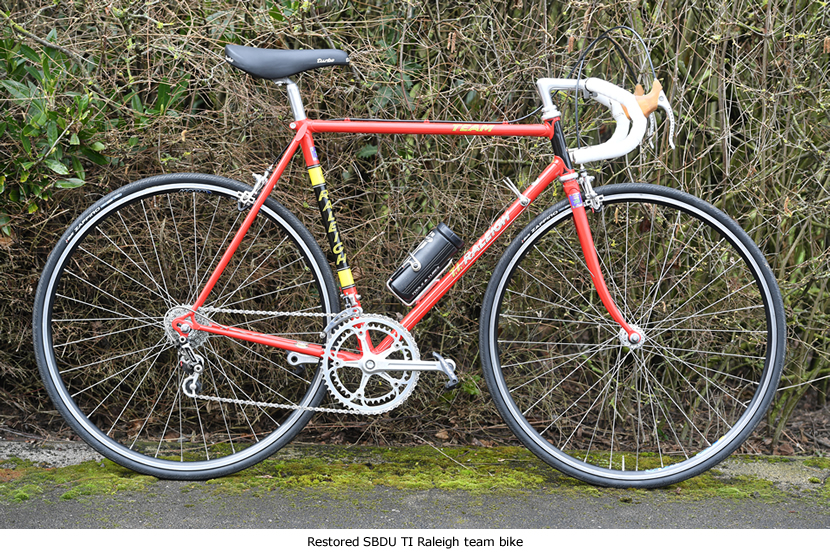 Excellence was SBDU and the TI-Raleigh team’s watchword, and according to many, particularly the Dutch riders in his teams, the main driver for excellence was TI Raleigh’s manager and sports director, winner of Paris-Roubaix in 1964 and kingpin of 1960s six-day racing, Peter Post.

Testing the water
Raleigh dipped its corporate toe in European races in 1972 and 1973. The team had British riders and a British manager, but it was under-funded and consequently its manager and riders couldn’t perform anywhere near their collective potential. So the man in charge of the project, the late David Duffield, better known for his lyrical if sometimes wandering TV commentary work, asked Raleigh’s board to considerably up their investment. He would need money for his next step.

“I wanted to hire Peter Post, and I knew he would want good money, both for himself and to run the team,” Duffield told me in 2012. He continued, “I commentated at the Skol Six-Day race in London, so I’d seen Peter work as a rider and later saw him as the race director. I can sum up what I thought about him leading TI Raleigh by saying he was a winner, I’d seen that, but he had something else. He was a tough racer and he was respected for it, but he had a certain something, a natural authority if you like. I just thought here was a man who would be equal to any challenge. Here is the man we need to manage and guide TI Raleigh.”

Post’s takeover saw the team move to mainland Europe for 1974. He brought in some Dutch riders and began to make life difficult for the Brits in the team, or so the story goes. It’s become accepted in British cycling that Post got rid of the Brits because of prejudice. It’s said he didn’t support them, gave them inferior equipment, and he was sarcastic and bullied them.

It’s true that Phil Bayton returned to the UK, so did Sid Barras, and they were two of the team’s best riders. Others returned too, but there were issues aside from Post in their decisions. 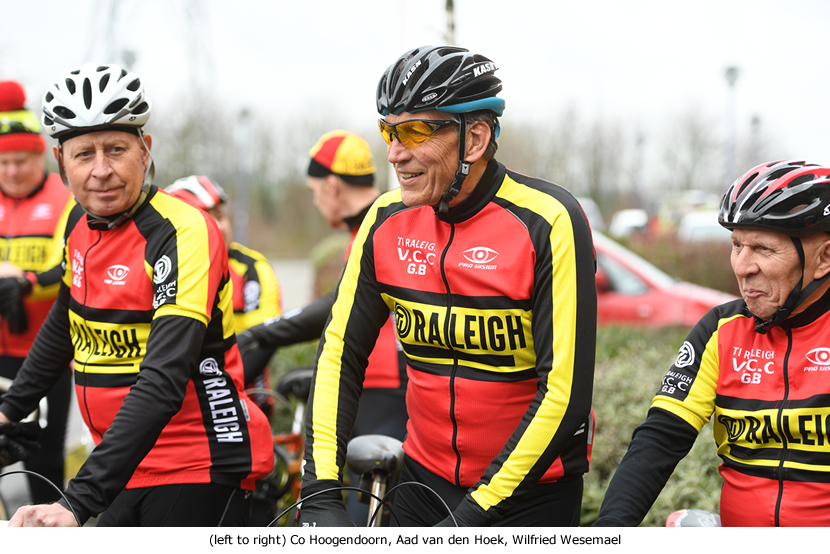 Post admits he was hard on the British, but he was hard on everybody, as he told me many years later; “I didn’t do it because the British were bad riders, I just needed to get into their heads what European racing was about, what a pro team was about. It’s not about individuals trying their best and trusting to luck. It’s about having a plan and executing it so the team wins the race. Barras, for example, was very good, very fast, but he didn’t have what I thought was the right attitude, and I couldn’t change him.”

The loyal camp
There is no doubt Post was hard, and his management style wouldn’t work today. He didn’t just alienate British riders either, one of his best Dutch riders, Jan Raas hated Post’s management style. He eventually left the team, and later when Raas was a team manager too he and Post waged almost constant war.

But for all those on the wrong side of Peter Post, those who genuinely and with good reason didn’t like him, there are others who really rated him and who were eternally loyal. Gerrie Knetteman was one, Eddy and Walter Planckaert, Marc Sergeant too, and there are many more. But the man who displayed most loyalty to Post was someone who Post described as the perfect professional, Henk Lubberding. He spent all his 15-year professional career in Peter Post’s teams. 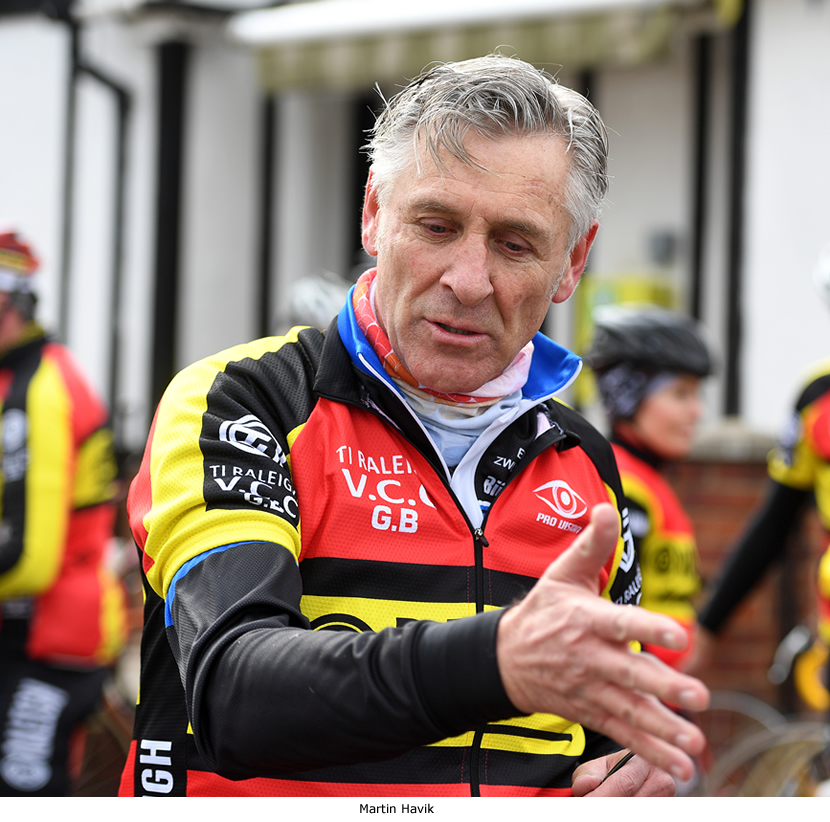 The main reason for their loyalty was explained by one of the ex-TI Raleigh riders at the reunion, Martin Havik; “Post brought the best together, the best winners the best team riders, and he gave them the best equipment and best contracts. By doing that he created an environment in which they could and would give their best.”

A deal was a deal with Post, his word was his bond, even those who hated him say that. He already had a centre of excellence in the SBDU when he took over, and he built on it. Although later, when Raleigh made an accountant-led decision and wound up the SBDU, Post didn’t always get the bikes he wanted, and he sent them back.

His pursuit of ‘the best for the best’ even extended to team cars. Post insisted on Mercedes Benz, not the Peugeots or Fiats most of the 1970s pro peloton depended on. One of his original Mercedes team cars, now lovingly preserved by its owner Jonny Van Ireland, was at the reunion with the Dutch riders. 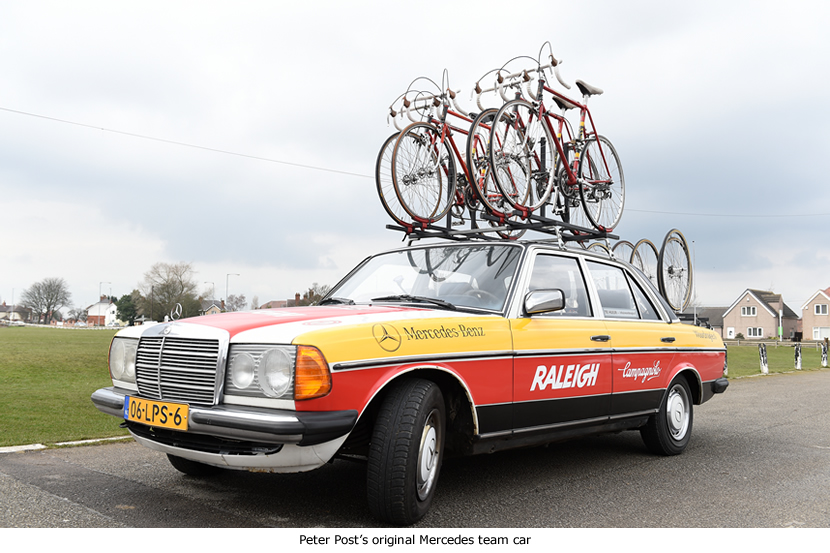 Enthusiasm
TI Raleigh Vintage Cycling Club was created in 2016 by Laurence Morgan and some friends. They all owned Raleigh bikes in their youth, and have restored some fantastic examples of SBDU frames to the things of beauty they once were. They wanted to create something to celebrate the team.

“I contacted Raleigh to see if they were okay with us using the company name as a cycling club, and ended up talking to the managing director. He said yes, then asked if we wanted to use the full TI Raleigh name,” Morgan told me shortly after the club formed. 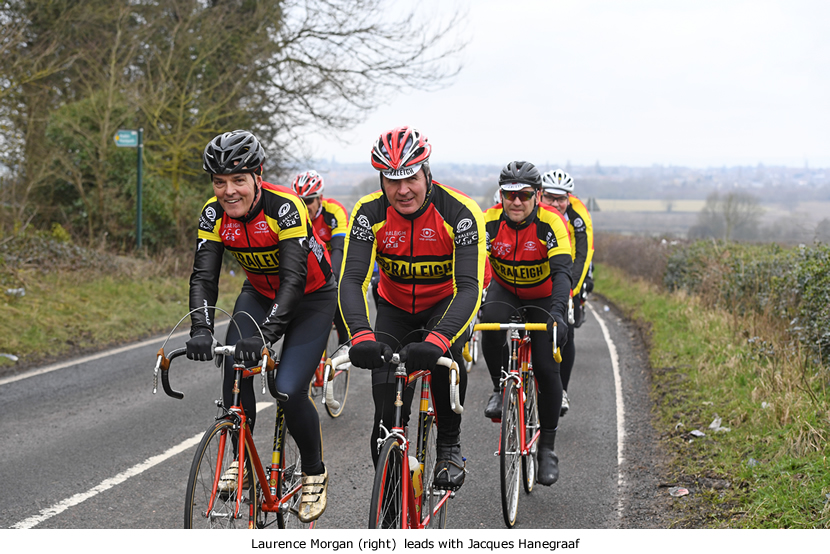 Membership has spread throughout the country, so a central location was chosen for the first club-run. It started from the Universal Cycle Centre in Maltby, South Yorkshire. A perfect choice because Universal owner Dave Marsh did many of the club’s bike restorations. Catherine Neary is responsible for the perfect re-sprays in TI-Raleigh colours, and what the former Carlton Cycles and long-time bike shop owner, and restorer, Dave Marsh doesn’t know about these and other classic bikes doesn’t really matter. 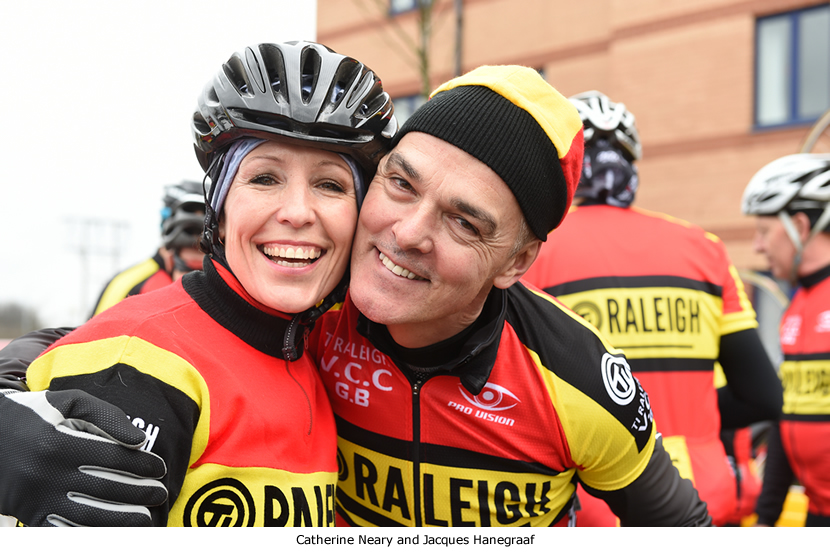 Then in 2017 Laurence Morgan contacted a former TI-Raleigh rider, Piet Van Katwijk, who invited him and some other club members to meet and ride with some of his ex-team mates in the Netherlands. For 2018 the TI-Raleigh men decided to return the favour and held their reunion in South Yorkshire.

Pure nostalgia
Eight ex-pros made the trip; Dutch riders Aad van den Hoek, Co Hoogendoorn, Jacques Hanegraaf, Piet van Katwijk, René Koppert and Martin Havik, along with two Belgians, Franky De Gendt and Wilfried Wesemael. Most were hard-riding team men when they raced, the kind of riders Peter Post really liked, but they were winners too. Hanegraaf won two Dutch professional road race titles and the 1984 Amstel Gold Race. Piet Van Katwijk was a sprinter with a number of stage wins who also won the 1973 Milk Race overall. And Wilfried Wesemael won a stage in the 1975 Vuelta a España, and the Tour du Suisse overall in 1979. 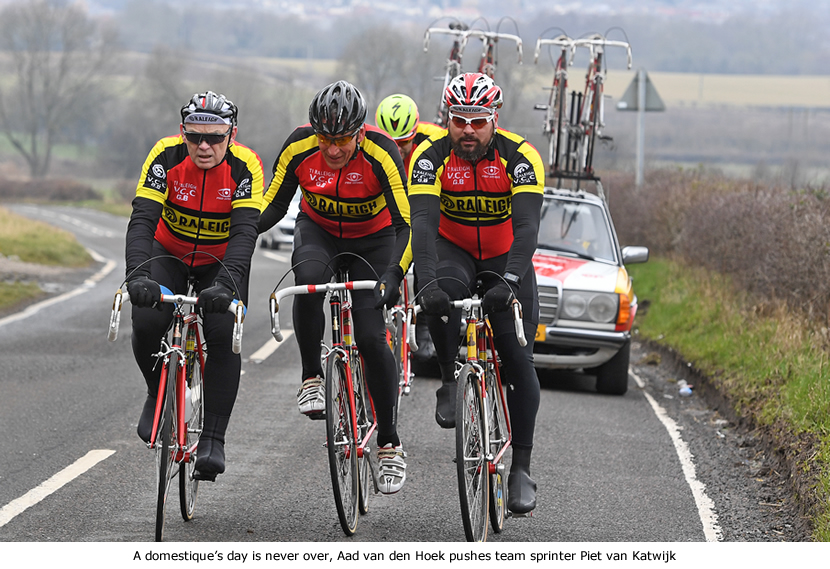 And what a sight they made swooshing through the South Yorkshire/North Notts countryside, an area so redolent of Flanders, lined out, two by two in almost identical TI-Raleigh kit, followed by their old team car. It was pure nostalgia, mixed with a good old fashioned British club run. 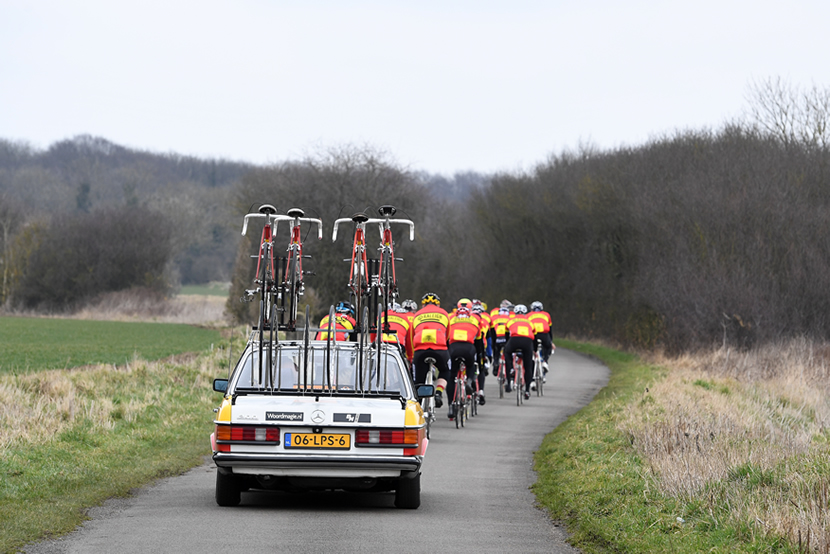 The riders enjoyed the country lanes and varied scenery, swapped stories and stopped off in Harworth to visit Tom Simpson’s grave, which was a moving moment. They then pressed on into North Nottinghamshire, and stopped for lunch at Café Roubaix in Retford before heading back into South Yorkshire. “A lovely day, and a great celebration of cycling,” said Martin Havik after the ride. And so it was. Here’s to the next one. 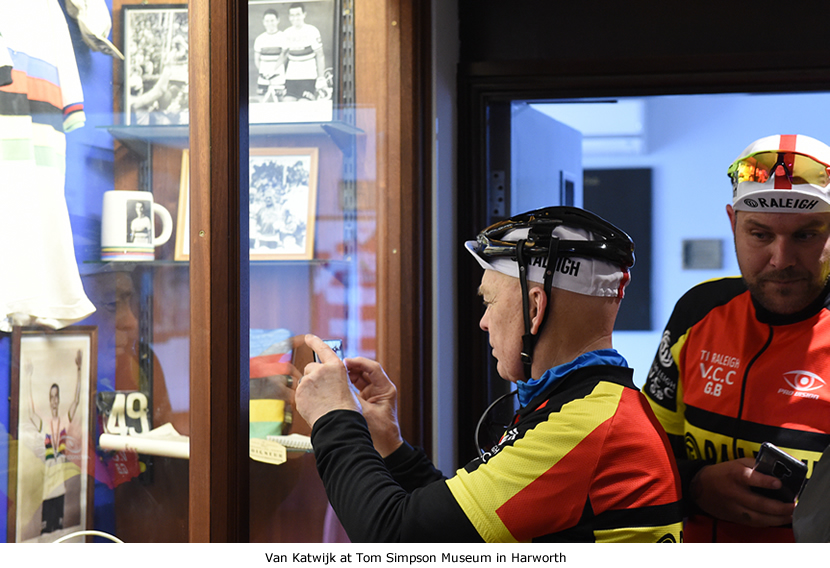