Claude Criquielion, champion, classics winner and respected team manager died on 18th February 2015 after a very short illness. He was 58, four years on we look back on his life
.
Claude Criquielion had a French-speaking head and a Flemish heart. He was born in Lessines, a town in the French-speaking Belgian province of Hainault. The Flemish border is just up the road, and Geraardsbergen and its famous Muur is only eight kilometres further north. 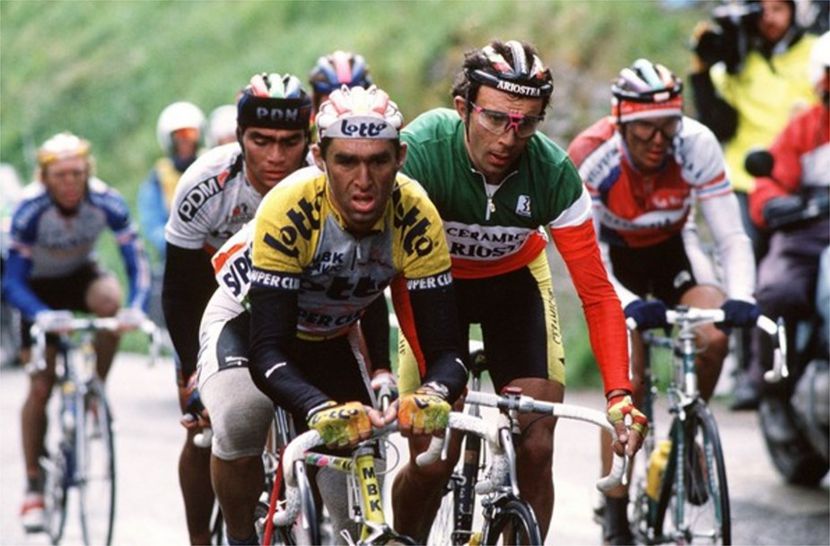 Criquielion was a natural athlete, class on a bike, but cycling wasn’t how he started his sports career, he had his father to thank for the switch to two wheels. “I was a good runner at school, winning all the cross-country races. They wanted me to take up athletics, but my dad said no. He loved cycling. We had a farm, but when the Tour de France was on TV nothing stopped him watching. Whatever needed doing on the farm, he’d do it later. When I was 12 he bought be a mini racing bike and a Peugeot team jersey. When I took out my first racing licence, my dad said it was the happiest day of his life,” Criquielion told the Belgian journalist, Noel Truyers shortly after winning the world pro road race title in 1984.

His running ability didn’t immediately transfer to cycling. “I failed at first, although my dad kept quietly encouraging me, so I decided I had to train really hard. That was when I started enjoying it,” he explained. With harder training Criquielion started winning; 37 times as a junior and 27 times as an amateur. He won a stage of the 1977 Tour de l’Avenir, then he was selected for the Belgian team for the 1978 amateur world road race championships, and he nearly won that. 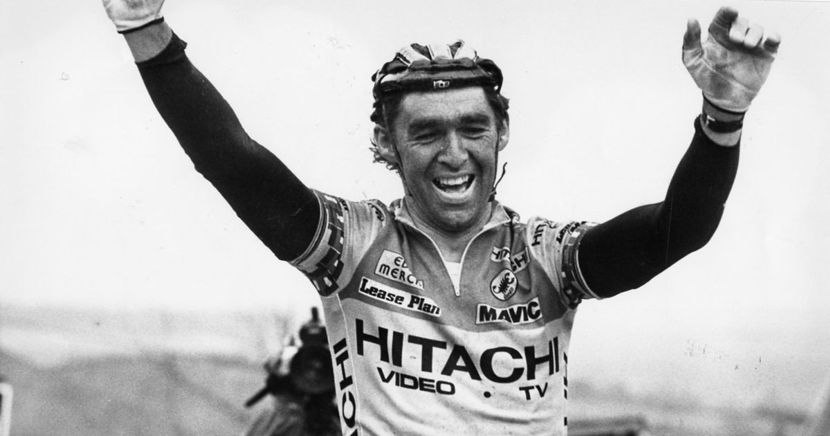 Several pro teams wanted him, but Criquielion chose the Spanish Kas team, “Because Lucien Van Impe was the team leader. I thought he could be a good stage race rider, and there wasn’t a better way to learn than from Belgium’s last Tour de France winner.”

At first it looked like Criquielion’s future would be as a Grand Tour contender. He was ninth in his first Tour de France while working hard for Van Impe, but later reckoned that performance ruined the next five years of his career. Belgian media pressure was immense.

In the eighties, and it still persist a bit today, the Belgian media couldn’t wait wait to find the ‘Next Eddy Merckx’, and Criquielion was one of the first ‘Next Eddys’. He failed in the following few Tours, and the press hammered him for it. Criquielion wasn’t a natural Grand Tour rider, his first Tour result flattered to deceive, but he had other abilities. It took the diffident young Belgian little bit longer than most to find his way in the pro peloton.

“I wasn’t self-confident like some new pros are. I felt uncomfortable on cobbles, I hated the elbow work you need to get in a good position in the Classics, and I wasn’t the kind of supple climber you must be to win Grand Tours. I still got a few good results, because I had abilities, but it took me a long time to adapt to pro cycling. I had to learn skills and find the aggression to hold my place in the peloton,” he said. 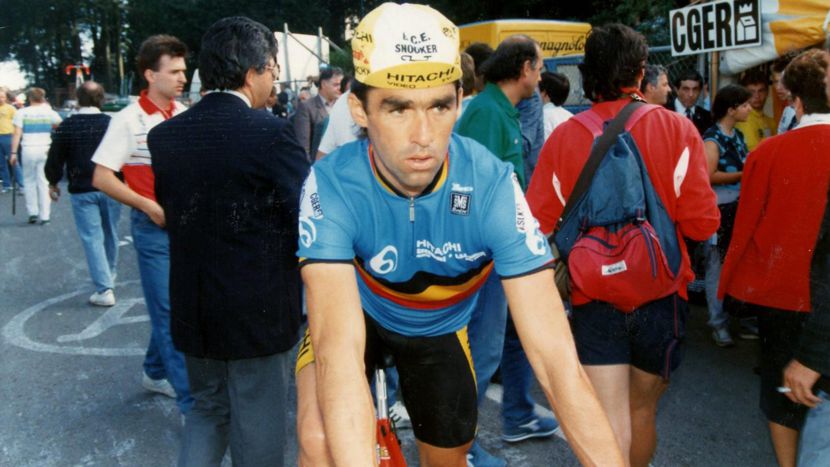 The 1984 world road race championships was Criquielion’s big break. It was held in the Montuich area of Barcelona, and Criquielion had already won twice on the Montuich circuit. It suited his strengths. The race was hot and hilly, a grinding down process without much in the way of tactics. Criquielion was its master. He owned the race, romping away from the break to win alone. 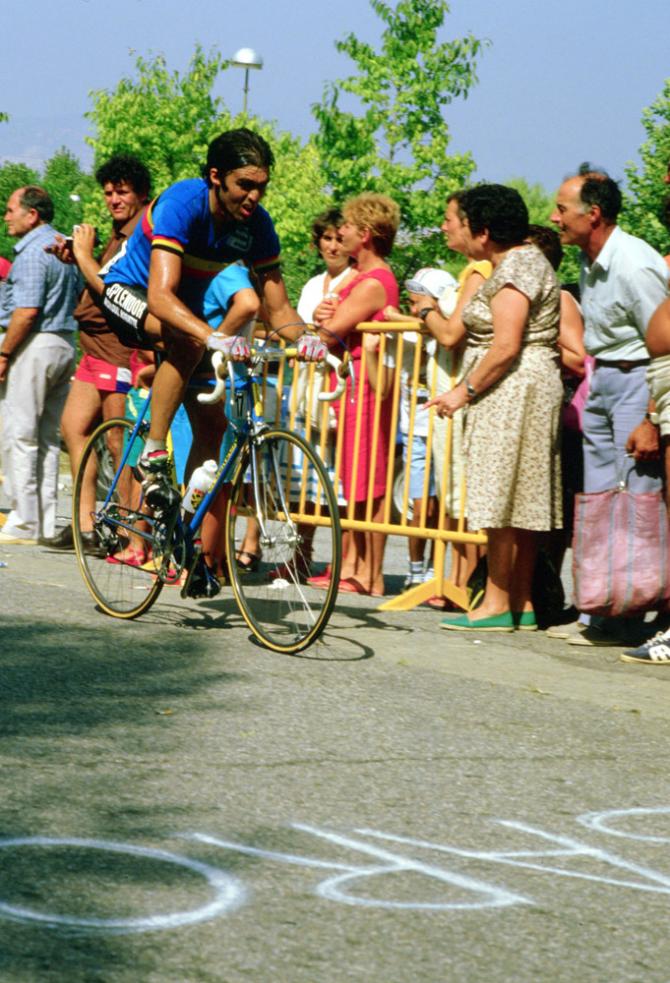 Being world champion made a huge difference. Not to his legs, they’d always been good, the difference was in Criquielion’s head. His confidence soared. “The rainbow jersey gave me morale to fight,” he said after he won it. Five years of promise but no consistency were over, Claude Criquielion’s cycling career really took off.

Even before his world title the Belgian had told journalists he was no longer focusing on Grand Tours but on the classics. And in 1985, looking magnificent in the rainbow bands, Criquielion won La Flèche Wallonne, was second in Liège-Bastogne-Liège, sixth in the Tour of Flanders and eighth in the Amstel Gold Race.

They were great results and they confirmed that Criquielion’s single-day ability stretched across all terrains. He had a natural propensity towards the Ardennes Classics, but he was also mastering the cobbles. In 1987 Criquielion won the Tour of Flanders, he was used to the course by then because Flanders was where he trained. 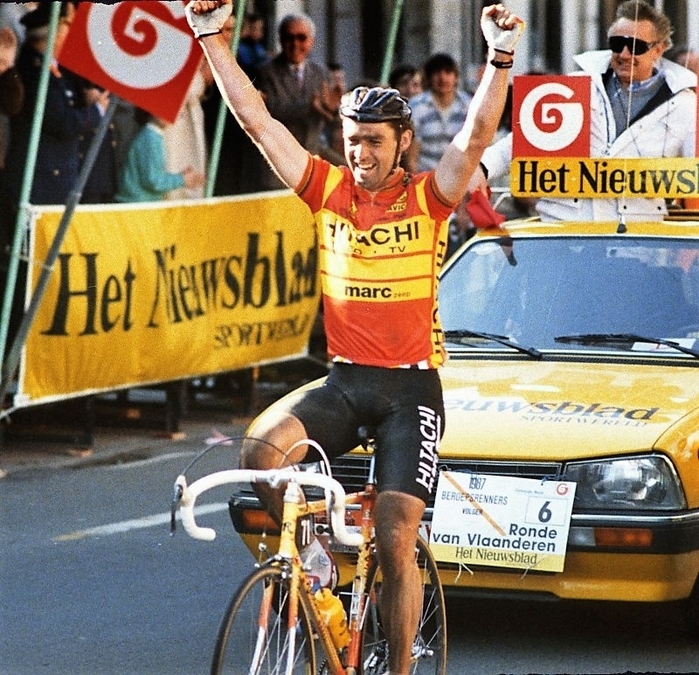 He’d made his home in Deux-Acren, a village even closer to the Flemish border than Lessines. Almost all East-Flanders climbs are within a 30-kilometre sweep of Deux-Acren. Criquielion started doing cyclo-cross to improve his bike handling, so his Flemish soul was formed, although he always said his greatest regret was never winning Liège-Bastogne-Liège.

“They waited until I retired to have an uphill finish.” Criquielion once said. He was second twice, third once and fourth twice, always when the race ended after descending into Liège, and not after climbing out of it like it did after he stopped racing.

Bad luck, but there was one defeat that must have given Criquielion nightmares. It certainly did that for his co-escapee in the 1987 race, Stephen Roche. Roche and Criquielion got clear towards the end of the race, but as the finish approached Roche’s DS, Davide Boifava told him to play cagy. Roche, uncharacteristically, went against his racing nature, and did what Boifava told him.

Their break had started near the top of La Redoute, where Criquielion pushed so hard he forced a split. He went over first, Stephen Roche followed, and the reigning world champion, Moreno Argentin of Italy just tagged on behind. After Argentin there was a gap, and the three pulled away. 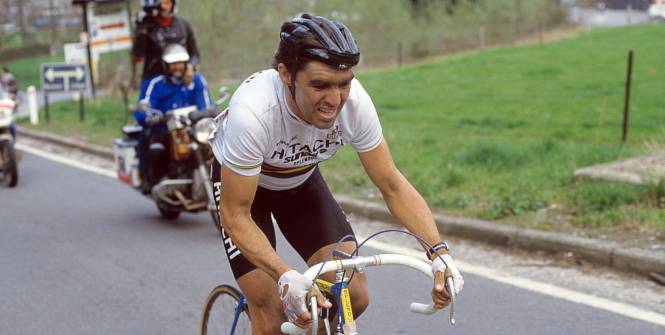 Criquielion, a master of anything a single-day race could throw at him by now, flew down the other side of La Redoute. Roche followed but Argentin couldn’t hold them. The Belgian-Irish duo had cracked him, or so they thought.

They got a good lead, but Roche stopped working in the last couple of kilometres, so Criquielion slowed down and a futile game of poker began. What they didn’t know was that Argentin had waited for a few riders to catch him, worked furiously then gone after Roche and Criquielion. He caught them in sight of the finish line.

The erstwhile leaders were taken by surprise, and they were tired after their efforts on La Redoute. Argentin blew right by them and neither could answer his sprint. Argentin won, Roche was second and Criquielion third. They would never have been caught if Roche hadn’t took his foot off the gas, and the Irishman reckons it was a long time before Criquielion forgave him. But that was nothing like the grudge Criquielion held against another English-speaking rider after what happened the following year.

The 1988 world road race championships were held in Ronse, another border town like Lessines, but on the Flemish-speaking side. Ronse has world championship history. The 1963 road championships were held there, and the pro race ended with the infamous Benoni Beheyt-Rik Van Looy ‘who pulled who’ sprint, which is still talked about today. The 1988 finish will be remembered for its controversy too.

Criquielion had thousands of fans on the hilly circuit, and he didn’t disappoint. The race followed the default pro worlds pattern, a tough circuit and ever-increasing pace wore things down until the big hitters were left for the last lap. Criquielion attacked, and a 23-year-old Italian, Maurizio Fondriest went after him. He caught the Belgian with seven kilometres to go. 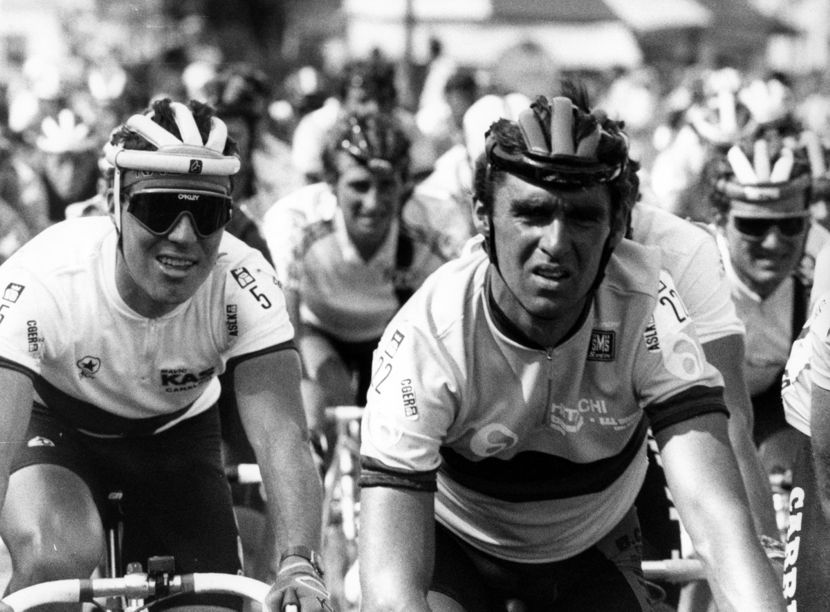 It looked like it would be between these two, but a miraculous effort from Canada’s Steve Bauer bridged a 17-second gap to catch the leaders with 800 metres to go. Bauer eased, took some deep breaths, and the other two tried to size up how much he had left. Then Bauer showed them, launching his sprint.

Criquielion jumped after him and Fondriest was left standing, still riding hard but looking at bronze. Bauer gritted his teeth, stuck his elbows out and went for the line. Then Criquielion started to come past, but he decided to go on Bauer’s right, the side nearest the barriers. Bauer took his hand off the handlebars to reach his down-tube gear lever and veered right, a 1.5-metre gap began to close.

It was the gap Criquielion was using to try and get by. With less space available, his front wheel hit one of the concrete feet of a crowd barrier and he crashed. Bauer was distracted, Fondriest saw what had happened, started sprinting again and flew past the Canadian just before the line.

All Hell broke loose. Fondriest was jubilant, the Italian fans went mad, but for once they couldn’t be heard. There was 250,000 people on the 13.2-kilometre Ronse circuit, most of them Belgian and they wanted Bauer’s guts. The race judges disqualified him, and the Bauer was put under police guard for his own safety. To add to the problem he lived in Belgium, not far from Ronse, so for weeks afterwards the police had to guard Bauer’s house and his family.

Criquielion slowly got up and walked across the line, dragging his busted bike behind him. Ten riders passed him, then the controversy moved to the courts. Criquielion sued Bauer for criminal assault. It took years and two appeals to bring things to a conclusion, and Criquielion lost. It was a sad affair that saw everybody suffer. 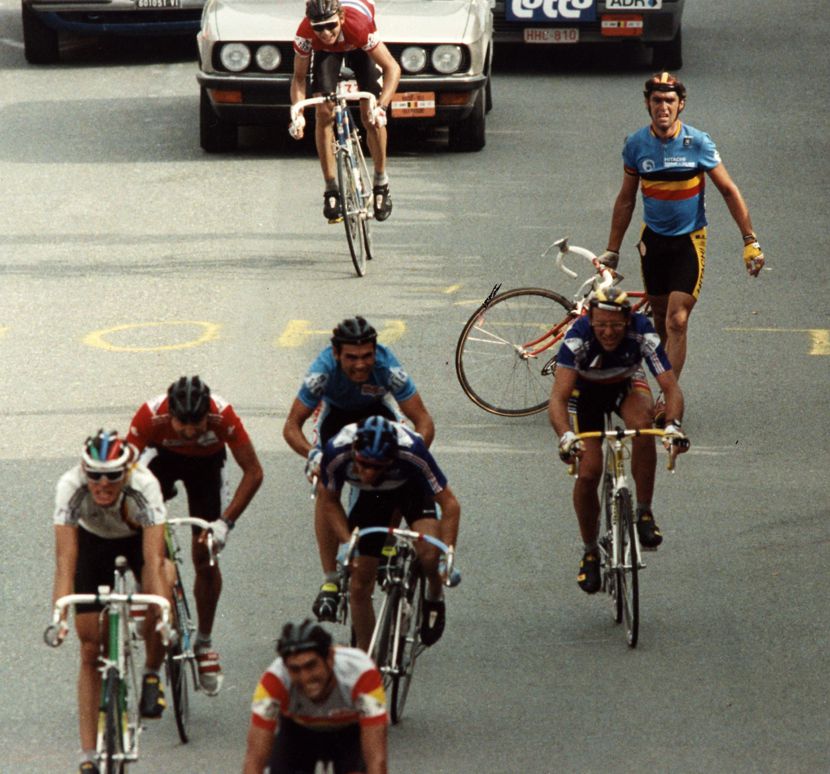 Many tributes were made to Claude Criquielion by friends and rivals at his funeral, but perhaps the most poignant was from Eddy Planckaert. He felt that Criquielion was remarkable; easy going for a cycling champion, but highly respected. He also felt it was a shame that what happened in Ronse tended to over-shadow the many great victories he had. 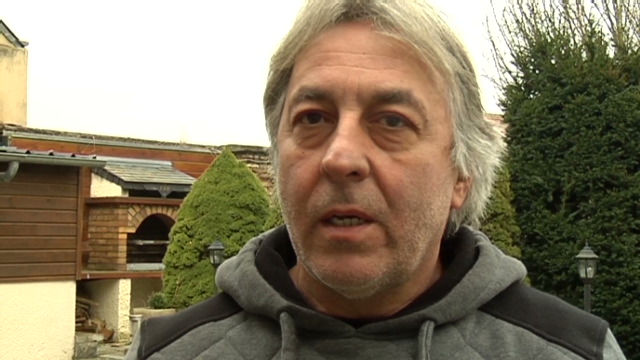 Claude Criquielion was a class act. In many ways his action after Ronse wasn’t typical of him. He believed he was right, though, and he was an honest man by all accounts who must have felt that pursuing Bauer was correct.

But it’s best to remember Claude Criquielion on a bike. He was an incredible stylist with a powerful burst of speed and the physical strength to make it stick. Once in a breakaway he was whole hearted, rarely crafty, and even when he was a successful champion he was never too proud to help a team mate.

Claude Criquielion stopped racing in 1991, well before his power waned, which is always a classy thing to do. Then when he became a team director he did the job with dignity. His difficult start made him an ideal man to help new pros through their first years. He was also an Alderman in his local community. Those who knew him say Claude Criquielion was a family man, a caring man, as well as a great champion. Rest in peace Claudey. 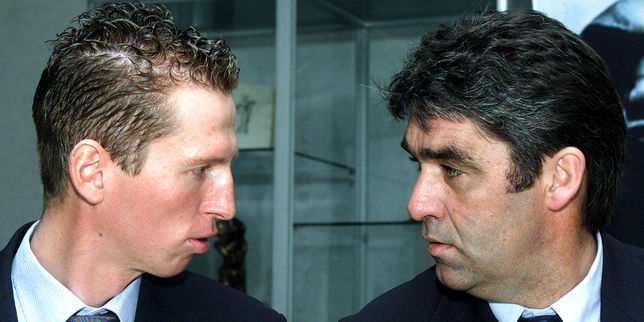