Rik Van Steenbergen is not only one of the greatest all-round bike racers ever, but also the dictionary definition of a professional cyclist. All he wanted was to make money, and he had to win big to do it.

Road or track, circuit race or classic, Rik Van Steenbergen won them all, and he won a lot. His road career stands comparison with the best, but Van Steenbergen was also the best six-day track racer of his generation, and it was a generation when the six-days really mattered and were really hard. 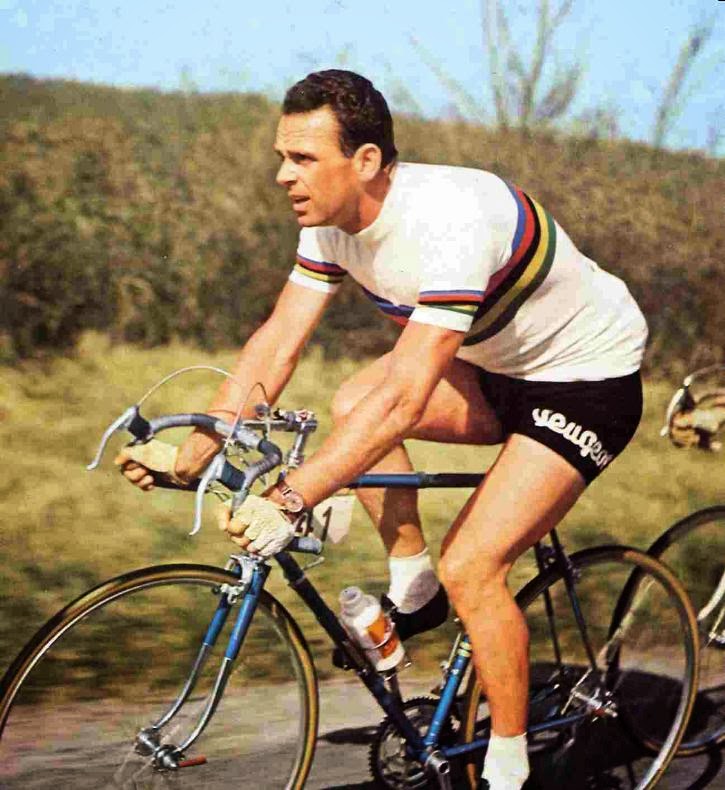 Van Steenbergen’s only weakness was he didn’t climb well enough to win a Grand Tour, but second place in the 1951 Giro d’Italia suggests he could have. Bradley Wiggins became a Grand Tour winner after a glittering track career, but it would never have paid Van Steenbergen to do the same, not in his era.

The Tour de France was important when Van Steenbergen raced, but not as important as it is today. It wasn’t so much bigger than any other race, like it is now. On top of that professionals earned money by racing a lot, rather than focussing on winning one race and taking time out to train for it, no matter how big that race was. 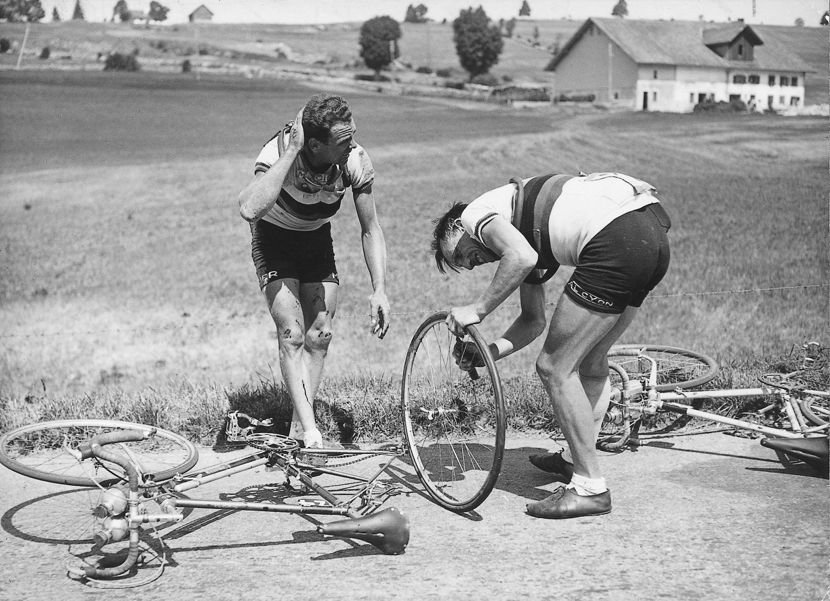 The Dutch writer, race organiser and serial entrepreneur, Charles Ruys summed up pro cycling in Van Steenbergen’s time when he wrote this in Sporting Cyclists magazine; “Rik has beaten the best in all fields. Had he specialised I believe he would have been the best ever in road racing, or even stage racing. I even think Rik would have won the Tour de France. But Rik never specialised. Instead he accepted the best contracts to race wherever, whenever and in whatever.

“A six-day? Fine. An Omnium? Okay. A road race? Splendid. Monday a track event in Copenhagen, Tuesday a road race in Nice. Wednesday a criterium in Berlin, Thursday another track meeting in Amsterdam, and so on and so on. Rik would be there, so long as the money was there. And the promoter paying him was safe knowing that Van Steenbergen would give a good show.” 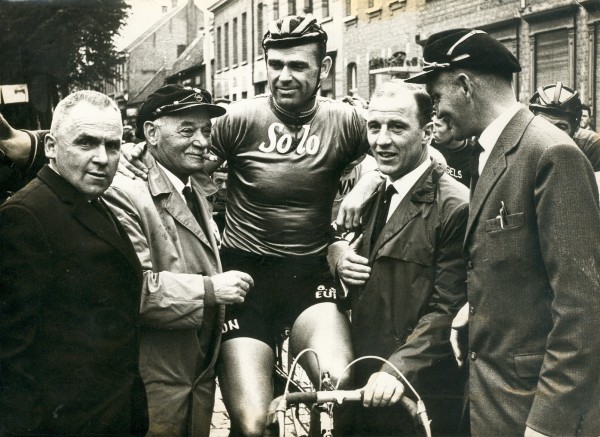 Any time, any race, anywhere, Rik was ready

That’s what pro cycling was like during Van Steenbergen’s career, which spanned the forties, fifties and the 1960s. Riders could get rich, but they had to race a lot. That meant winning big races, then cashing in on them by getting contracts to ride a lot of little races. The little races had paying spectators who wanted to see the big stars in action in their towns and villages. It was the only way fans could get near their heroes. TV coverage of big races was restricted to short newsreel films until live broadcasts started in 1960. Van Steenbergen raced as a professional on road and track, summer and winter for 25 years. And during that time he won more than 1500 races.

He started racing in local unofficial races at the age of 14, taking a delivery job with a butcher to help him buy equipment. The job also gave him a brush with stardom when he was asked to deliver meat on his butcher’s bike to the house of a local cycling legend, Karel Kaers. 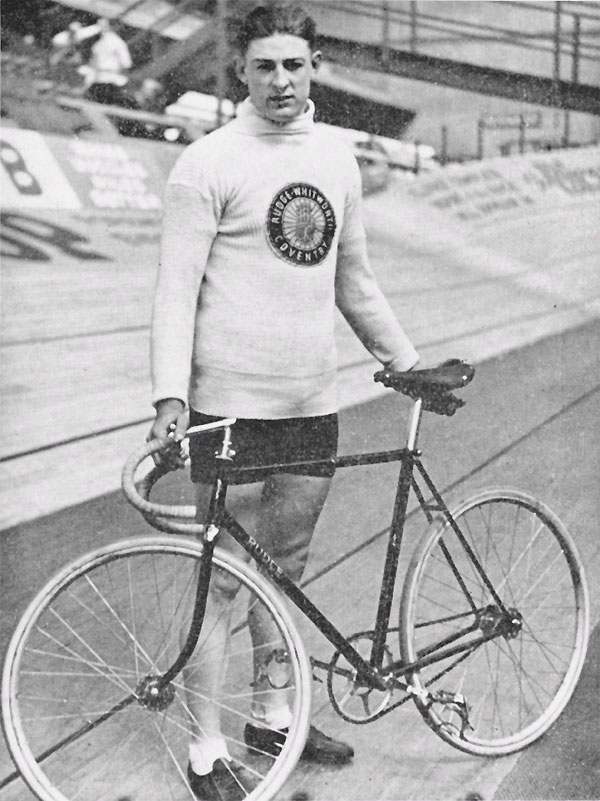 He took a full professional licence at 18, mainly racing on the track, but mixing in road races to build up his stamina, and he carried on winning. Kaers was selected for the Belgian team for the 1934 world road race championships, which was on a fairly flat circuit in Leipzig, Germany. The race ended in a sprint, which Kaers won, he was 19 years old.

But even as world road race champion he maintained his form on the track because outdoor track meetings paid good money in the summer, and the six-days were even more lucrative in winter. Kaers set several world records, all paid for in highly publicised record attempts. The canny Belgian was always careful to just beat the old figures, so he’d have a chance of going quicker at another paid venue. He kept winning on the road too, taking the 1937 Belgian national road race title, as well as winning the 320-kilometre Circuit of Paris road race.

Kaers carried on until 1942, by which time Rik Van Steenbergen was getting established, and Kaers recognised his talent. He even remembered the first time they met. In 1963 he told the French journalist René de Latour, “Rik was a strong young boy when I met him. He came to my house, knocked on the door and when I answered he blurted out that he wanted to be a professional racer, and asked would help him. I liked him. I let him borrow a bike and I helped him start racing, but I take no more credit than that, Rik did the rest.” 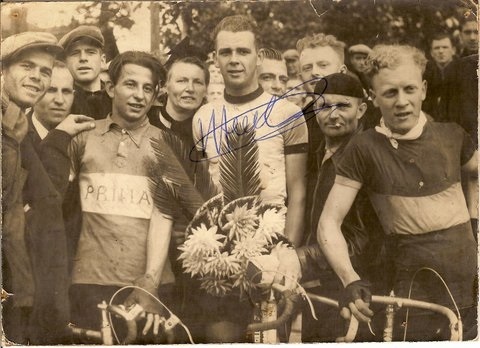 The Germans were occupying Belgium when Van Steenbergen’s cycling career started. He turned professional in 1942 when he was 17, using a forged ID card to do it. The following year he was Belgian road race champion, and in 1944 he won the Tour of Flanders, narrowly defeating Briek Schotte. He was 19, and is still the youngest ever winner of one of cycling’s monuments. Van Steenbergen was lucky not to be involved in a crash at the track finish entrance, but you make your own luck in sport, and a teenage winner of one of the five oldest and hardest single-day races is unlikely ever to be repeated. 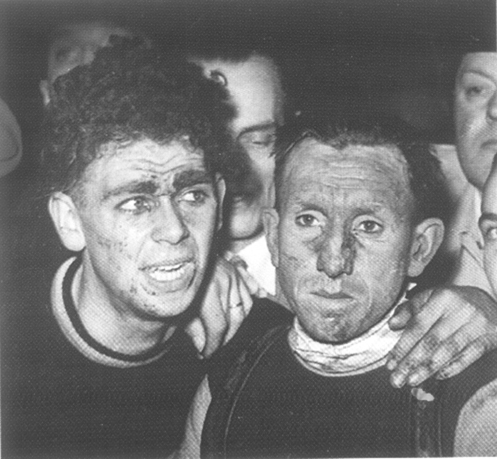 Van Steenbergen’s best years followed that victory. He won the Tour of Flanders again in 1946, Paris-Roubaix in 1948, then he won his first professional world road race title in 1949, the year he also won two stages in the Tour de France and La Flèche Wallonne. He won two stages and finished second overall in the 1951 Giro d’Italia, but van Steenbergen’s finest road race victory came in 1952. It was his second win in Paris-Roubaix, and what made it special was the man he beat to win it; Fausto Coppi.

It is one of the finest battles in the history of the number one cobbled classic. Coppi is one of the greatest, some say the greatest, and 1952 was a year when he was at the height of his powers, seemingly winning as and when he wanted. Paris-Roubaix is brutal but simple, a battle of attrition that only the best win. In 1952 the front group slowly dissolved to two; Coppi and Van Steenbergen, two totally different riders.

Coppi was the ultimate Rouleur, a man who could ride at the front then crank up the pace, and kept on cranking until he was alone. Once ahead he was almost impossible to bring back. Van Steenbergen was much faster and far more explosive, but he was also strong and durable. If Coppi was to win this Roubaix battle, he had to drop Van Steenbergen. Coppi could drop anyone, but not the Belgian, not this day, and not in Paris-Roubaix. Van Steenbergen soaked up everything Coppi threw at him, then beat him in a sprint on the Roubaix velodrome. 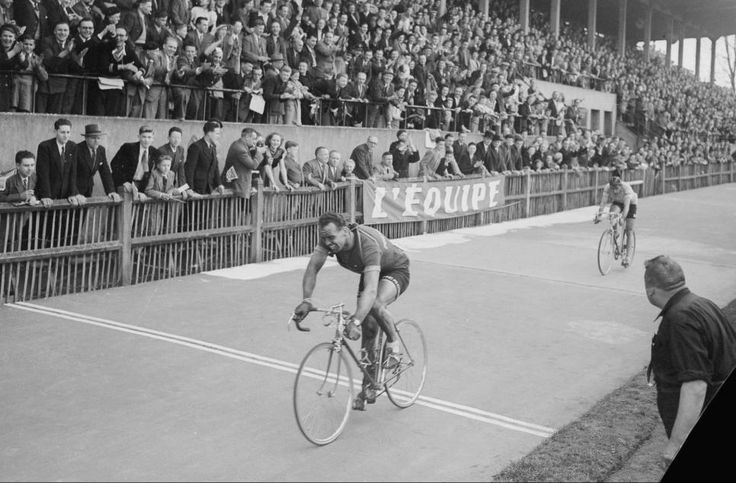 Beating Coppi on the Roubaix Velodrome

That win changed Van Steenbergen. He suffered deeply to hold Coppi, and afterwards admitted he’d been one more Coppi attack from being dropped. Luckily there was no time left for the Italian to attack. Still, the experience changed the way Van Steenbergen raced.

He was famous, everybody wanted to see him, so he was paid more and more by race promotors. Van Steenbergen was good in six-day races too, and they paid very well. Another world title, another Paris-Roubaix win, they wouldn’t make much difference now to how much promoters paid him. Van Steenbergen took every contract for any race where the money was good, no matter where or what it was. Making money became his end, winning big races was just the means to achieve it. 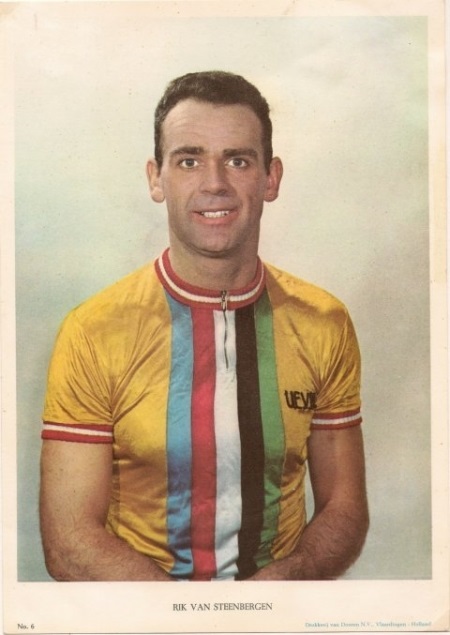 After winning one of his European track titles

“He wandered the world with a pair of handlebars and his saddle ready to race anybody anywhere,” says his French contemporary Raphaël Geminiani. Legend has it that in one 48-hour period Van Steenbergen raced in the Congo, Copenhagen, Paris and Liège, and he won all the races in all four places. If the race was more than a car journey away Van Steenbergen stipulated in his contract that there had to be a bike ready for him to race on, he would supply the handlebars and saddle.

The French rider turned writer Jean Bobet says; “Rik would ask the organisers of any race that was paying him three things; what time the race started, the address of a good restaurant, and when would he get paid. He liked to pick up his fee on the day, and would turn down a contract if that wasn’t possible. He wasted no time; he would turn up at the race, prepare his bike then ride, and ride to win.” 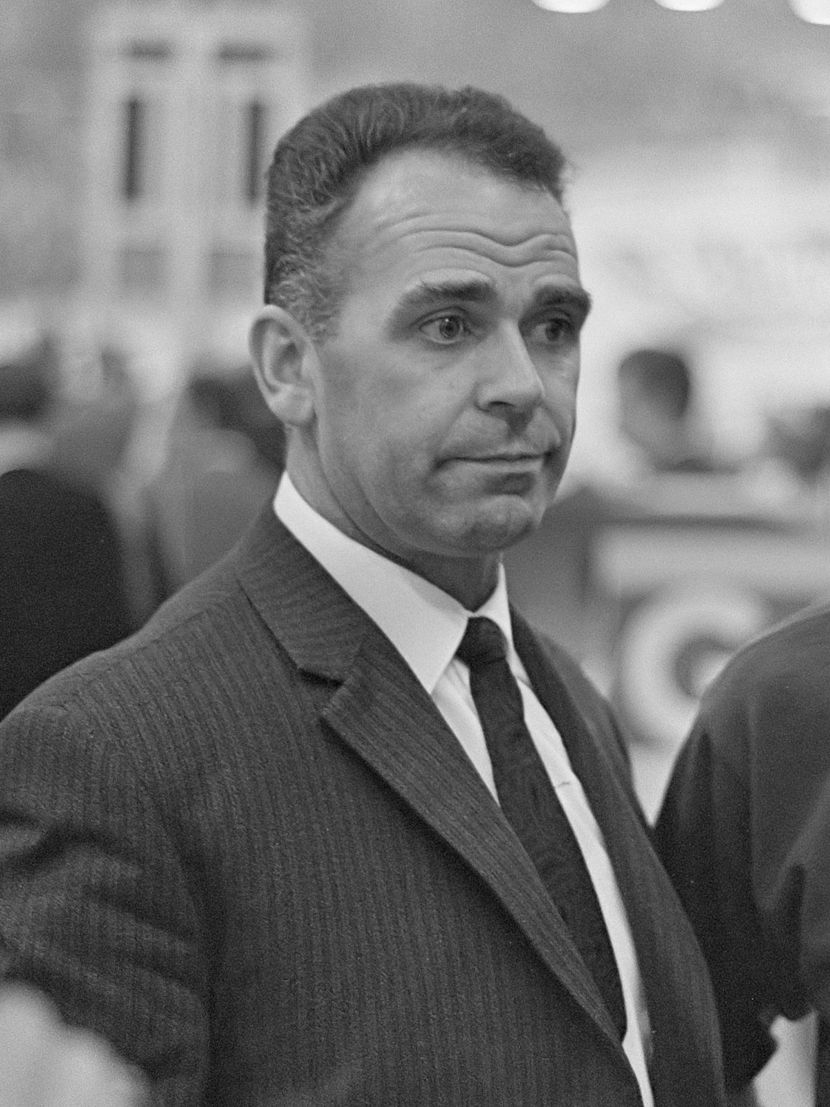 It got so that Van Steenbergen only looked for a big road race win when he sensed that demand for him on the criterium and track circuit was starting to to wane. Then he’d put his road race face on, and win another big one.

Van Steenbergen was a tall muscular rider who weighed 83 kilograms. He could take a lot of punishment and quickly soaked up the effects of hard training. In 1958 after Rik Van Looy, a younger man from the same region, had a string of big wins and was in danger of eclipsing him, Van Steenbergen went out and rode 1000 kilometres in training in one week. The week after he won La Flèche Wallonne for a second time. 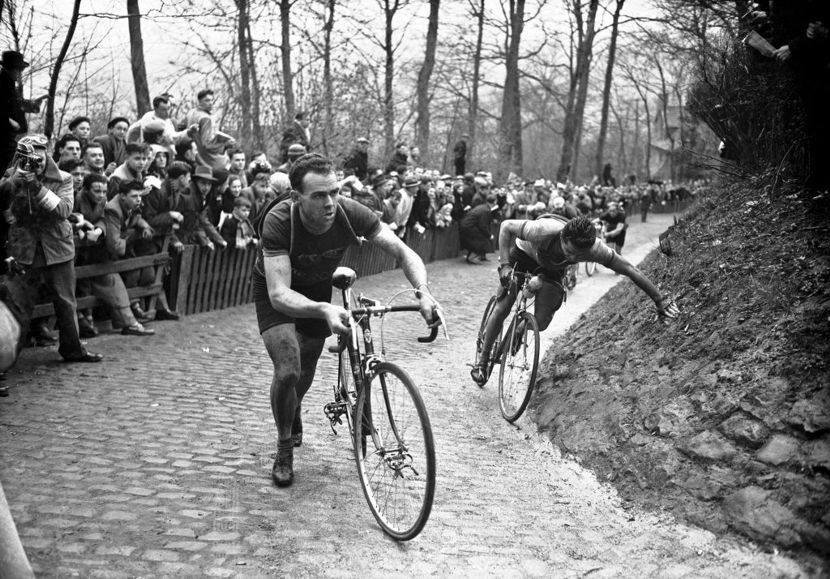 That was Van Steenbergen’s last big road race victory, but it came on the back of two consecutive world road race titles in 1956 and 1957. He could have won much more, which in the context of cycling today brings the suspicion that he was an unfulfilled talent, but he wasn’t.

To judge Rik Van Steenbergen you must put yourself in the mind-set of his era. Pro cycling was a professional sport that served as a diversion for working people. It gave them a focus, something to share and to talk about. The same people identified also with how hard cycling was. But above all it was entertainment, and it was viewed as such by many who took part. 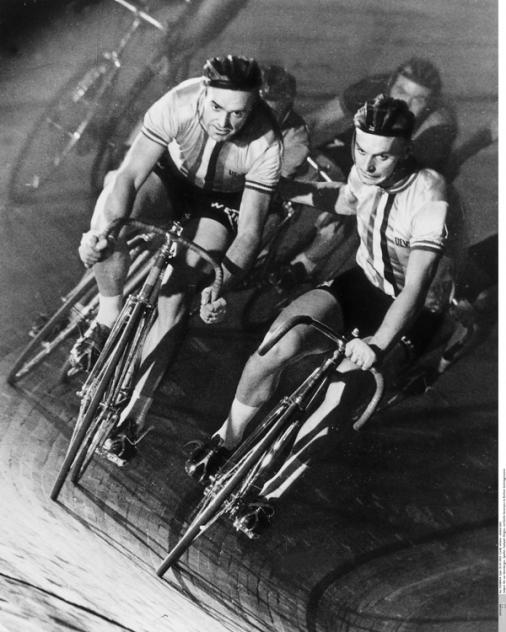 In 1966 Jacques Anquetil was asked why he hadn’t won a classic or a world road race title. “Why should I,” he replied. “The promotors can hardly afford me now because I have won the Tour de France five times, why should I try to win more races when doing so won’t increase my income?” Then he won Liège-Bastogne-Liège, just to prove he could.

Van Steenbergen became a massive celebrity in Belgium. When he finally retired from cycling in 1966 at the age of 42 after a 25-year pro career, Van Steenbergen did so with a series of sell-out track appearances. The last one was in the Sportspaleis in Brussels where Prince Albert, who became King of Belgium in 1993, and Princess Paola were in attendance. 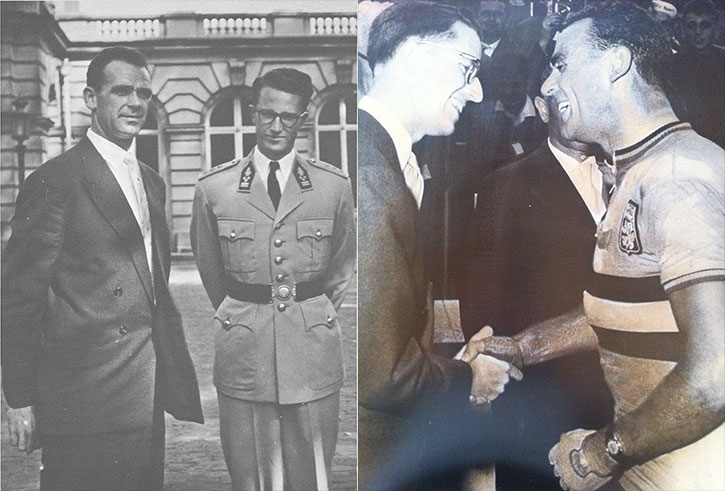 Two shots of Rik with Prince Albert of Belgium

A huge success as a cyclist, Van Steenbergen was less so after he retired. He made some dubious friends, spent money unwisely, and lost a bit through gambling, as well as an expensive divorce.

There was a time when he cut a tragic figure, but he found happiness when he re-married an English woman, who when they met had no idea he’d been such a celebrity. He was often see at races after that, a guest of honour and revered as an elder statesman of Belgian cycling. He died in 2003 at the age of 78 and the great and the good attended his massive funeral. Rik Van Steenbergen was a winner we won’t see the like of again. 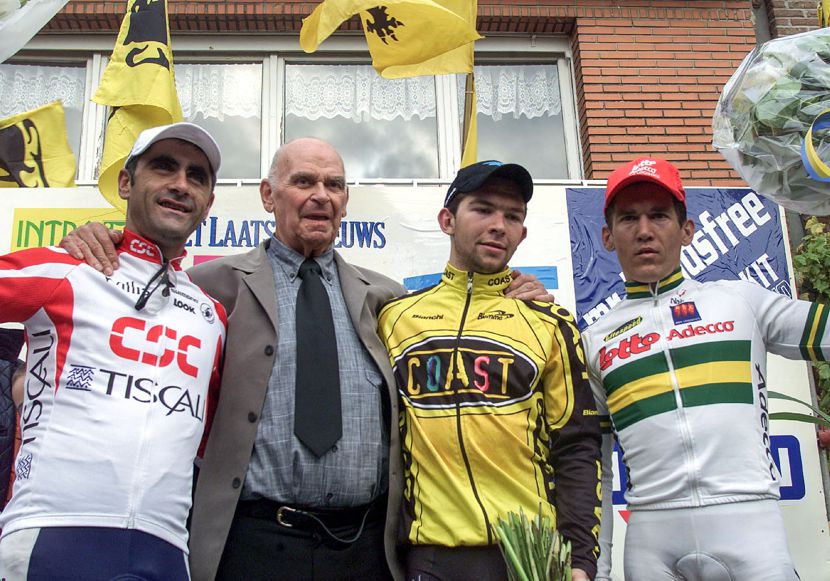